WANTED DEAD OR ALIVE is an American Western television series starring Steve McQueen as the bounty hunter Josh Randall.  The series launched McQueen, known for the concept of “cool’ in entertainment, as the first television star to cross-over into comparable status on the big screen.
This rig is in every detail accurate to the rig worn by Josh Randall the relentless bounty hunter.

The Mare’s Leg Holster
Many hours were spent researching and designing the prototype for this holster that carries a Winchester ’92 (shown with a ’92 Puma)
but can be used with a Henry large bore or Henry 22 or Rossi Ranchhand- few modifications were made: 2 1/2″ belt vs. a 3″ belt.
The holster is made with 2 layers of leather for strength and durability. A metal hook is built into holster for the saddle ring to drop onto it and a leather covered steel band to secure the forearm. 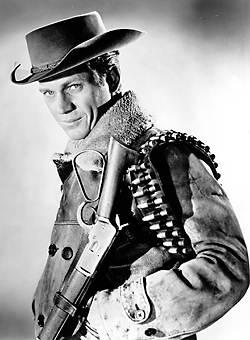 Handmade in the USA